The north's premier old motoring event namely the Beamish Run was undertaken on Sunday 16th. June 2013, for vehicles manufactured up to 1956. For the 2013 'Silverware winners' scroll down the page. 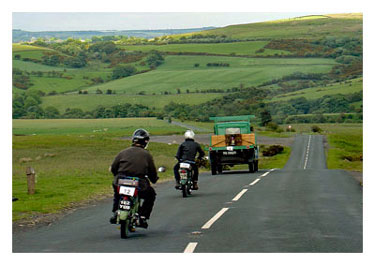 This event is probably the oldest and toughest regular event for old cars, motorcycles and light commercials certainly in Britain. This is no Sunday spin out for old museum pieces, these vehicles are used in events all the year round and some are actually daily transport!

It should be remembered that these are heritage vehicles in the custody of their present owners. Until quite recently these were used and driven by enthusiasts whom were familiar with and actually used them as daily transport in their hey-day. Sadly quite a few of our octogenarian and older enthusiasts have either retired or have passed on having "slipped their moorings" so to speak, but their vehicles live on in this world. The event has a long heritage of about 90 years and maybe more.

The hills and dales we now run over, were once the test grounds for the then infant motor vehicle, both before and after the Great War (1914-1918) period. These events were used by manufactures, magazine publicists and motor clubs, so our event this weekend is a re-enactment of these previous events broken only by WW2 and its aftermath. However, the Beamish Run is beginning to be historical in its own right as it approaches its 50th year.

The new series was re-started in 1970 - 71 to be run over some of the former trial routes. What we have done is to join up the routes and form a continuous run of 155 miles to incorporate most of them, where possible. This has actually only been possible owing to the vast improvement of the road surfaces, which in 1918-1939 period were often just loose stones, euphemistically termed "gravel bed'" roads, the surface of which often broke up after bad weather!

Sadly, owing to so-called improvements these days, to cater for vast numbers of vehicles, not always well driven, some of these roads are being bypassed. These become "land locked" and therefore unusable especially in light of certain clauses and actions in the "green lanes" policy. In principle we are not against this, and we note that the unprecedented use of the ubiquitous 4x4 and other off road motor vehicles, has probably caused this legislation due to surface damage caused to historical routes.

We have in fact only recently experienced the closure of Stanhope Ford for an unspecified period of time owing to health and safety reasons?!

This is a total travesty and this stupid and ill-informed decision will live on in infamy. This has been a river wear crossing for some 2000 years, and certain geriatric cabal of ill-informed meddlers have closed this heritage road facility to vehicular traffic. This is another liberty taken away from the public, especially the younger generation, travellers, and of course, Stanhope residents. We did not experience any troubles at the ford and only once did we marshal it off during the 2007 event, owing to high water. I deemed it unsafe for our vehicles to pass, it should be realized that these vehicles are worth many millions of pounds collectively!

I and others made written suggestions to the authorities concerned with the ford, that approach notices informing drivers of a fine and rescue cost for a frivolous breakdown whilst traversing the ford causeway should have been displayed. It should also be noted that our vintage vehicle movement generates £4.3 billion and employs up to 150,000 people nationwide (see automotive press reports).

We hope entrants and spectators alike enjoy the event, we also hope we are blessed with good weather for this is a heritage event with heritage vehicles upon a heritage route.

Give them a wave and a cheer as they go by!

Wolsingham Town - Checkpoint 1. Market Place 9 till 11.30 am and Wearsbank Hill Test further on Edge Hotel Woodside - Checkpoint 2. from 9-10 till 12 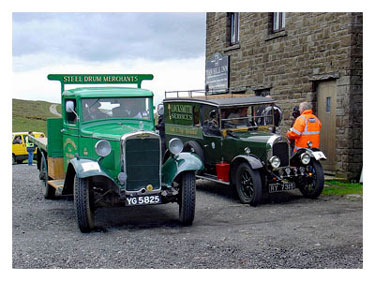 Most people make for this point as all the vehicles are static but must only stay for one hour, all will leave by about 2.30pm. Take great care when on the green. Please do not touch the vehicles.

Muker Mileage - Vehicles pass through this village twice, before lunch 10.40 till 1pm and after lunch 1.10 till 3.30pm

Romaldkirk Village - Checkpoint 6, 2.1 Still 4.25pm A very nice village where the church hall is open for cakes and cream teas etc. But entrants must not linger too long!

Bollihone Quarry - Checkpoint 7, 2.30 till 5pm Very popular spot next to the river (Beck) Checkpoint. if entrants are not allowed through Ford.

Lanchester Town - 3 till 5.30pm and Church Bank Hill Test Passing through slowly due to road junctions

When the event closes you can see the vehicles park up and sign off and view the survivors! and maybe meet the organizers. 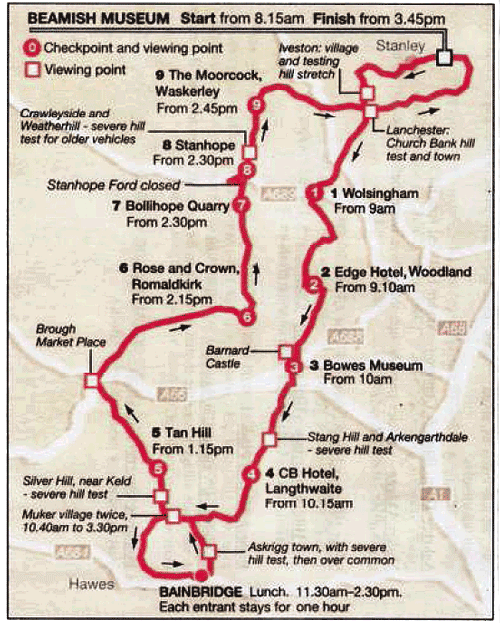 On the day we have about 85 - marshals on the whole event route but the behind the scenes work which takes many months employs only two volunteers namely George and Maureen Jolley when one event finishes the next is planned' Next Beamish Run: next year!

THE OUTWARD ROUTE From BEAMISH MUSEUM EVENTS FIELD onto the A6076 to STANLEY then A963 to ANNFIELD PLAIN where a left turn into minor road and up HILL TEST IVESTON BANK through the now very swish village with homes costing well over 7 figures! and then cross the A691 and into FIVE LANE ENDS. Then follow the B6296 to WOLSINGHAM and CHECK POINT 1.

At WOLSINGHAM turn onto the A689 then left on minor roads and hill test WEARS BANK then BEDBURN and a right turn to skirt the Hamsterley Forest taking beautiful minor roads to WOODLAND and CHECK POINT 2, then by minor roads via COPLEY south to join A67 for BARNARD CASTLE turning left at the butter market for CHECK POINT 3 in the BOWES MUSEUM where toilets and a wonderful tea room and restaurant are available, as well as the museum itself. Then through BARNARD CASTLE across the bridge turning left for the A66 which is crossed with caution to take the B6277 for REETH, and the road across ARKENGARTHDALE FOREST is followed to the HILL TEST at the STANG BANK and then onto LANGTHWAJTE and CHECK POINT 4 at the CHARLES BATHHURST (CB) INN where toilets and refreshments and lunches are available.

After check point 4 a right turn onto minor roads is followed to LOWROW onto the SWALEDALE B6270 road. Then west along the dale to MUKER after a left turn onto the HAWES road via the BUTTERTUBS PASS hill test which must be negotiated and onto HAWES and the A684 leading to BAINBRIDGE green and the event halfway point lunch stop, w+iere sustenance and petrol are to be found. THE INWARD ROUTE

From BAINBRIDGE minor roads are used to reach ASKRIGG and the hill test on ASKRIGG BANK and across the magnificent ASKRIGG COMMON to rejoin the B6270 and left to MUKER again. The route then heads west to TETWAIT and KELD and the hill test at SILVER HILL then onto CHECK POINT 5 Britain's highest Inn at TAN HILL.

Then turning to head west to BROUGH via minor roads, turning right at BROUGH after the market clock, take MIDDLETON IN TEESDALE road but bear left onto B6276 HIGH FORCE road, passing the SELSET reservoir turning right into MICKLETON after which turn right onto the B6277 for ROMALDKIRK and CHECK POINT 6 where the adjacent church hall is open for home made cakes and teas plus toilets.

The B6281 and B6282 is followed to EGGLESTON passing EGGLESTON HALL where LADETTES TO LADIES was filmed recently as a TV series, then into STANHOPE via BOLLIHOPE QUARRY and CHECK POINT 7

Normally we would cross the river at STANHOPE FORD, but not this year when the bridge must be used. The route through STANHOPE goes up the hill test at CRAWLYSIDE towards EDMUNDBYERS on the B6278 a turn right leads to WASKELY passing the reservoirs to THE MOORCOCK INN and CHECK POINT 8. Minor roads are taken to cross the A68 at ROWLEY when the route heads southeast \ la minor roads through FIVE LANE ENDS again and onto the B6296 for LANCHESTER

THE ROUTE BY DALE, VILLAGE AND PENNINE HILL.

Each entrant is given very comprehensive route card instructions plus cautions and safety notes, and start at 1 minute intervals.

The complete 155 - mile route is tough, even for a modern vehicle, but more so for old cars, motor cycles and light commercials including old military vehicles all from the 1920s to early 1950s

Each vehicle must make a series of unbroken runs through the various major hill tests and the driver must stop at each of the check points to be quizzed by check point marshals. These point scoring questions are upon the highway code of today and yesteryear plus motor history and maintenance

To run the event we have over 80 marshals at check point stops and observed sections both open and secret plus the start finish and lunch stop at Bainbridge, where the entrant is allowed to stay one hour. During which they must have their luncheon, check their vehicle over and complete a point scoring short written road history and safety qui/ sheet.

This has their arrival and departure times appended, overstay earns a loss of points No vehicle leaves for the afternoon section of the event before 1pm and all must depart at 1 minute intervals by 2-30pm when the end course closing marshal departs together with the vehicle first aid teams

The marshals are all volunteers, and the event could not go ahead without them. These 85+ marshals are drawn from the NORTH of ENGLAND CLASSICS AND PRE-WAR AUTOMOBILES (formerly known as the NORTH EAST CLUB FOR PRE
WAR AUSTINS (NECPWA)

THE TEESDALE and DISTRICT MOTOR CLUB

THE BAINBRIDGE and DISTRICT MOTOR CLUB

THE FRIENDS OF BOWES MUSEUM (FOBM)

Plus many ‘privateers’ - All receive a special enamel badge and year bar plus eventually long service plaques.

There is within the vintage vehicle movement a certain amount of prestige in taking part and especially finishing the Beamish Run. The participants accrue points at the various check points and lunch time quiz these are positive scores.

The negative scores are points lost at observed sections both open and secret plus any Highway Code violations etc.

Each entrant receives a commemorative enamel lapel badge and date bar for each subsequent year. The bars are colour coded Gold for first class award, Silver for second class, Bronze for all finishers and Red for non -finishers, all trophy winners also receive replica plaques.

Best Car Over 12HP: “The Herrington Industrial Services Cup”. Tony Gray of Darlington with 98 points, driving a 1936 Bentley 4(and a quarter) litre.