The Beamish Safety and Reliability Trial

The 'Beamish Run' For 2022 is unfortunately once again CANCELLED

The 'Beamish Run' Background and History

This event (always run on the 3rd Sunday of June Annually) follows some of the motor vehicle trial and test routes of the 1920's and 1930's and probably helped to develop the motor vehicle, as we know it today.

The event was re introduced in 1970 and formulated by The Friends of Beamish Museum. For various reasons it did not actually start until 1971. Since that day it has successfully been run each year up to the present time, yes even in 2001 on an altered and shortened route, owing to the national outbreak of Foot and Mouth disease! It should be noted that this 'modern' event has now been running twice as long as the original road trials of circa 1918 to 1939. 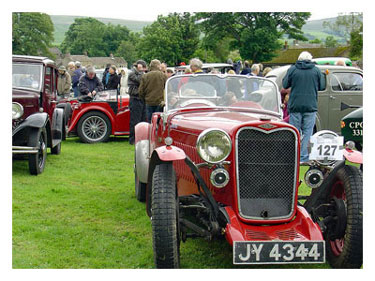 The present route starts from the sign on assembly point within Beamish Museum, which is where the event was initially formulated and gives the event its title.

This award winning working museum covers 300 acres and at least a day would be required to tour the site. So why not allow a day for visiting before or after our event? The Beamish Run will also take a full and pleasurable, if not testing day, to circumnavigate this heritage route.

The event takes in some of the best scenery in the country with most at its best in mid June. The 155-mile route wends its way through the charming and unspoilt County Durham countryside and forested areas to Barnard Castle, said to be the gateway to the Dales. This is where we have one of our important checkpoints, under the wonderful French chateaux style portico of the award winning 19th century Bowes Museum, and is also well worth an extended visit, they also have a good restaurant. The route then enters the Yorkshire Dales over the Stang Forest hills and into Arkengarthdale, then turning for Low Row and Gunnerside, then heading for the majestic Buttertubs Pass, via the village of Muker.

The route runs through Swaledale via Hawes and onto Bainbridge, which is the venue for the lunch stop, The village folk make us very welcome on the extensive village green, where up to 170 vehicles can assemble.

The afternoon section commences with an observed climb from Askrigg over the superbly-rugged Askrigg Common with a sharp descent again into Muker. The route continues via Thwaite, Keld then up Silver Hill and Tan Hill, to Britain's highest Inn and public house at Tan Hill summit, this is where we have yet another check point, much enjoyed by large groups of assembled public.

The route then snakes westward across Bowes Moor to enter Cumbria and heads towards historic Brough, which affords the entrant with some magnificent views of Brough Castle and some very fresh air! The route turns at Brough and takes the B6276 Eastwards with magnificent views of the Grass Holme Reservoir to exit at the Romaldkirk check point and then into the Durham Dales. The route now crosses Hamsterly Common and heads for Bollihope and into Weardale.

At Stanhope the entrants negotiate the very wide River Wear ford if passable, as it usually is, when on a good day thousands of visitors give a good welcome to all entrants. The route takes the stiff climb out of Stanhope over Crawlyside Bank and onto the Stanhope Moors, and then wends its way via various checkpoints through some wonderful countryside. There are views of the Derwent and Waskerley reservoirs as the route proceeds via Lanchester Town and Burnhope Village with the return via interesting former Roman backroads to reach Grange Villa and West Pelton Village and its Fells, eventually returning to Beamish Museum for die event sign off.

The route is designed to be testing to both car and driver but is totally a vehicle non-breaking event. There is however a small back up force together with the course-closing Marshal, when assistance can be given to the entrant, if unfortunate enough to experience a break down. This is limited to vehicle first aid and minor repairs only and is at the discretion of the closing marshal and his team. An entrant will never be left stranded and where possible taken to a point, where professional aid can be summoned. It is however, the entrant's responsibility to ensure that their various road rescue and repair agencies are in force and cover an event of this kind.

There are up to 10 checkpoints en-route where cars and entrants progress will be checked and questioned by experienced marshals. Entrants should have a good knowledge of the Highway Code of today and yesteryear, as well as motoring history and basic motor vehicle maintenance etc.

The route will be well marked in difficult areas with 'BEAMISH RUN" marker arrows. The entrant will be given easy to follow and full route instructions, for both the morning and afternoon sections of the event. This plus any extra cautionary notes thought necessary by the secretary of the meeting.

The event is competitive, knowledge and road craftwise, there are also secret checkpoints, where entrants driving behaviour is observed, when we expect the Highway Code to be put into practice. This also applies to the road hill observed sections, these together with static check point questions, allows the entrant to accrue a running score. 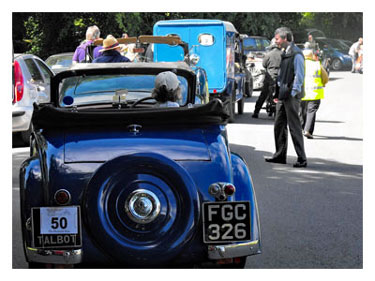 Each new entrant will receive a special vitreous enamel badge and a successive year bar. The year bars are coded according to the entrant's total score and are awarded upon merit as follows. The top scoring 5% of entrants GOLD, next 10% SILVER all other entrants BRONZE and non-finishers RED. These percentages can vary, depending upon the trial entrant numbers, and above all, trial conditions as judged by the secretary of the meeting. There are also many class trophies to be won, depending upon vehicle classification, e.g. vintage, post-vintage, post war classic, light commercial, pre and post war motorcycles.

The overall trial winner is awarded the magnificent Beamish Enthusiasts Trophy, presented by the Jolley Family.

These awards are either sent out or collected sometime after die trial event. This as it takes considerable time, to calculate results and award individual badges and bars to each entrant. These have to be specially produced to order, there is also a special issue to our 80 plus marshals. The event is solely organised by the honorary secretary and his family, this since 1999 inclusive, the secretary was an entrant for 25 years!

The trial receives a great deal of help in marshalling from various vintage and modern car, motorcycle and commercial vehicle clubs.

There is also aid from other non-motor related organisations, without whom the event could not proceed. The event does not seek to make a profit and aims to break even with a little money left to start up the following year, plus a small contingency fund, both held in the treasurer's account. This propriety and economy is reflected by the low entry fee, for an event of this kind. The trial takes considerable time, trouble and no little effort to set up and run, we earnestly hope that you will enjoy it, so why not give it a try and enter promptly!

All written enquiries and entry forms require a SAE please